OUTSTATION ALLOWANCE (OSA) FOR RMS STAFF- REVISION OF RATES THERE OF

No. D.G. Posts No. 28.2/2010-D dated 19.7.2011
The outstation allowance payable to the RMS Staff was last revised vide Directorate Memo no. 50-1/98-D dated 08.03.1999 and was under consideration at this Directorate for further revision in the wake of revised DA rates recommended by the 6th Central Pay Commission. 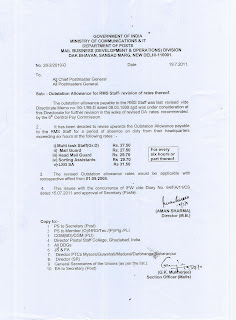 WELCOME ALL TO THIS BLOG. THIS BLOG IS AN EFFORT TO PROVIDE ALL THE MEMBERS, VIEWERS AND READERS OF AIPEU GROUP “C” AND ALL POSTAL EMPLOYEES THE LATEST INFORMATION, CIRCULARS, IMPORTANT FORMS AND GOVERNMENT ORDERS AT THEIR FINGERTIPS.

All the information published in this web page is submitted by users or free to download on the internet. I make no representations as to accuracy, completeness, currentness, suitability, or validity of any information on this page and will not be liable for any errors, omissions, or delays in this information or any losses, injuries, or damages arising from its displays or use. All information is provided on an as-is basis. All the other pages you visit through the hyperlinks may have different privacy policies. If anybody feels that his/her data has been illegally put in this webpage, or if you are the rightful owner of any material and want it removed, please email me at "aipeup3amravati@gmail.com" and i will remove it immediately on demand. All the other standard disclaimers also apply.

AIPEUP3AMRAVATI
Amravati, Maharashtra, India
Working as Postal Assistant as well as System Administrator in Amravati HO. In addition to this I am also working as Instructor WCTC, Amravati HO and working as a Divisional Secretary of All India Postal Employees Union P - 3, Amravati Division.