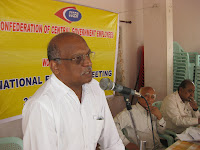 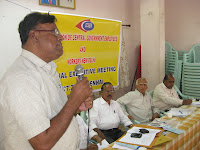 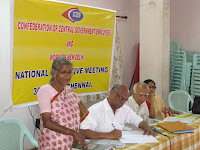 Conf/15/2011 Dated: 31st July, 2011.
Dear Comrades,
National Secretariat meeting and its decisions
The meeting of the National Secretariat of Confederation was held at Chennai on 30th July, 2011. Comrade S. K. Vyas President was in Chair. The following decisions were taken.
1. The campaign for popularising the charter of demands adopted at the National Council meeting held at Mumbai on 1st December, 2010 could not be undertaken in an effective manner as the major affiliate NFPE had to be busy with the preparation of the indefinite strike action.
2. The meeting decided that prior to any action programme; an intensive campaign is a pre requisite. Accordingly the following programmes were chalked out.
(a) Every affiliate will circulate the charter of demands along with the explanatory note amongst the employees. Meetings will be organised in front of all offices to explain the demands to the members. Report of such meetings will be sent to the Confederation CHQ directly. These meetings are to be organised between 5th and 10th September, 2011.
(b) Between 10th and 20th September, 2011 the State Committees of the Confederation will ensure thatdistrict level conventions are held and one of the State Committee member deployed to attend such convention in each district. The Sate Committees will send the report of these conventions to the CHQ.
(c) On 28th September, 2011 a massive Dharna programme will be organised in all State Capitals, district and divisional offices. At the State Capitals, a minimum number of 100 comrades will sit in Dharna. Lunch recess demonstrations will also be organised on the same date at the Dharna venue. One of the National Secretariat Members will attend the Dharna programme in each State Capital.
(d) All affiliates will organise a department level convention eliciting participation of the State level Executive on a date convenient to them but before 10th October, 2011. One of the National Secretariat members will make it convenient to attend such conventions.
(e) Rally and demonstration will be held in front of the office of the Chairman, Welfare Co-ordination Committee or any other central located place jointly by all the CGEs in all state capitals on 20thOctober, 2011.
(f) Immediate steps will be taken by all affiliate tocirculate the petition to the Prime Minister on PFRDA bill. Copy of the petition will be handed over to each member to obtain his signature as also his family members and friends. The State Committee will hold a review meeting on 10thOctober, 2011 to monitor the progress and take necessary steps to expedite the campaign.
(g) The National Secretariat will meet at Bangalore on 22nd October, 2011 to review the implementation of the programme of action including the signature campaign and take necessary action to remove deficiencies if any noticed.
(h) The Confederation will mobilise 10000 employees to participate in the ensuing march to Parliament (date will be finalised by the Steering Committee by end of August, 2011).
(i) To organise a day's strike jointly by all the organisations which participated in the 22nd July convention. The date for the strike will be finalised by the steering committee.
The declaration adopted at the convention, the draft letter to the Prime Minister demanding withdrawal of the PFRDA Bill, campaign leaflet on PFRDA Bill are sent herewith. (Copies of the same are also placed on our website).
National Women Committee of Confederation met at Chennai
The Women committee constituted by the National Women Convention held at Kolkata met at Chennai on 30thJuly, 2011. The Committee took the following decision. The meeting was presided over by the Chairperson, Com. Geeta Ghoshal and the proceedings were initiated for discussion by Com. C.P. Shobhana, Convenor.
1. To organise the International women's day on 8thMarch, 2012 at all State Capitals by organising a seminar on the subject "impact of the neo-liberal economic policies on women and women workers in particular"
2. To organise a State level Convention of women employees of the Central Government during September/October, 2011. The State Committees of the Confederation will take necessary steps to hold the convention.
3. To hold a demonstration in a prominent Central Government office by women workers in all State Capitals against the unabated price rise of essential commodities. The date will be finalised and intimated later. Steps will be taken to have massive participation of all women employees of Central Government in this programme by the State Committees.
With greetings,
Yours fraternally,
K.K.N. KuttySecretary General.
at 15:45

WELCOME ALL TO THIS BLOG. THIS BLOG IS AN EFFORT TO PROVIDE ALL THE MEMBERS, VIEWERS AND READERS OF AIPEU GROUP “C” AND ALL POSTAL EMPLOYEES THE LATEST INFORMATION, CIRCULARS, IMPORTANT FORMS AND GOVERNMENT ORDERS AT THEIR FINGERTIPS.

All the information published in this web page is submitted by users or free to download on the internet. I make no representations as to accuracy, completeness, currentness, suitability, or validity of any information on this page and will not be liable for any errors, omissions, or delays in this information or any losses, injuries, or damages arising from its displays or use. All information is provided on an as-is basis. All the other pages you visit through the hyperlinks may have different privacy policies. If anybody feels that his/her data has been illegally put in this webpage, or if you are the rightful owner of any material and want it removed, please email me at "aipeup3amravati@gmail.com" and i will remove it immediately on demand. All the other standard disclaimers also apply.

AIPEUP3AMRAVATI
Amravati, Maharashtra, India
Working as Postal Assistant as well as System Administrator in Amravati HO. In addition to this I am also working as Instructor WCTC, Amravati HO and working as a Divisional Secretary of All India Postal Employees Union P - 3, Amravati Division.